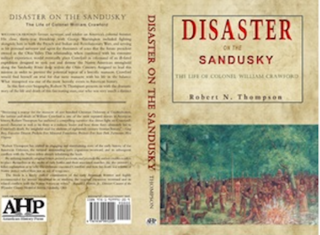 Disaster on the Sandusky: The Life of Colonel William Crawford

Re-creation of the cabin on William Crawford's farm near present-day Connellsville, Pennsylvania, which he named "Spring Garden."

In this first-ever biography, historian Robert Thompson tells the dramatic story of the life and death of William Crawford, a legendary figure from the violent world of the American colonial frontier, and a man recognized as a martyr by many Americans. Writing what has been described as a “compelling narrative,” the author shines light on a man who was once a legendary figure in American folklore and history.

A pioneer farmer, surveyor, and soldier, Crawford was also an ambitious opportunist who befriended young eighteen-year-old surveyor George Washington, thereby initiating a relationship that would last for over thirty years. The two men eventually became business associates, with Crawford hoping to reap wealth through Washington’s land speculation schemes in the Ohio Country.

Crawford would also serve under Washington as a soldier, taking part in some of the momentous events that shaped the future of America. He enlisted in Virginia’s militia at the outset of the French and Indian War, rising to become a captain under Washington’s command. Crawford was with Washington when he ambushed French troops in the Pennsylvania forest, an act that sparked a global war with France, and he was with Washington again along the Monongahela River when General Braddock’s British army met with disaster. Later, Crawford would join the patriot cause, leading a Virginia regiment with Washington during two great battles of the American Revolution.

It was the fighting against Native Americans that would determine Crawford’s ultimate fate. Following a brutal massacre of almost one hundred peaceful Christian Delaware men, women, and children by American militia at a small village called Gnadenhutten, the American commanding general at Fort Pitt asked Crawford to return to duty. An expedition against the Native American stronghold along the Sandusky River was being planned, and the general needed a commander who would not allow another Gnadenhutten to occur–that someone was William Crawford. Crawford had come to abhor genocidal tactics such as those used at Gnadenhutten, and he agreed to assume command despite strong doubts that the expedition could succeed. The expedition’s plan called for almost five hundred mounted militia volunteers to cross two hundred fifty miles of the Ohio wilderness in secret to make a surprise attack against a foe whose skilled, brave warriors were outraged by what had happened at Gnadenhutten. Crawford’s doubts proved to be all too sound.

As the unruly, undisciplined militia volunteers made a slow advance across the Ohio Country, they were observed and followed by Native American scouts. With no possibility of surprise, Crawford unknowingly led his men into an ambush by a powerful force of Delaware and Wyandot warriors. Withdrawing to an isolated patch of forest on the broad Sandusky Plains that became known as Battle Island, he and his men fought a hopeless battle for almost two days. As water and ammunition ran low, Crawford ordered a daring night escape attempt. But his plan for a rapid but orderly retreat quickly became a rout as hundreds of volunteers galloped off into the darkness in a cowardly attempt to save themselves.

Crawford was taken captive by the Delaware, who wrongly blamed him for the atrocity at Gnadenhutten. He was put on trial, where he was defended by a Native American ally and a former friend of Crawford’s, the infamous renegade traitor Simon Girty. Girty mounted an able defense as the trial took dramatic twists and turns.

William Crawford was sentenced to die by fire at the stake for a crime he did not commit, and one he had sought to prevent from happening again. His story is now recounted in an insightful manner that presents new information and a clearer picture of who William Crawford really was, both as a man and a military leader.

Praise for Disaster on the Sandusky:

“Becoming a martyr for the massacre of one hundred Christian Delaware at Gnadenhutten, the torture and death of William Crawford is one of the most repeated stories in American history. Disaster on the Sandusky is the first book on the life and times of William Crawford. Robert Thompson has authored a compelling narrative that shines light on Crawford’s moral character as well as his flaws as a military leader and how those flaws ultimately led to Crawford’s death. An insightful read for students of 18th century frontier history.”

“Robert Thompson has crafted an engaging and entertaining story of the early history of the American Colonies, the turmoil surrounding early expansion westward, and its subsequent conflicts with the Native tribes already inhabiting the lands. The book is well-researched and heavily documented, providing more details to the story than most of the early writers. His approach provides a nuanced glance into the life and motivations (good and bad) of two frontier friends—George Washington and William Crawford. One went on to be the “Father of Our Country” while the other has become a largely forgotten character of the early American frontier. By utilizing multiple original letters, period accounts, and journals the author enables readers to place themselves in the midst of early battles and their associated marches. He also provides a fuller explanation as to why the Delaware executed Crawford and how his death was a form of Native justice rather than just an act of vengeance. The book is a finely crafted examination of the early American frontier and highly recommended for anyone interested in or studying the original expansion westward and its related conflicts with the Native American tribes.” - Ronald I. Marvin, Jr., Director/Curator of the Wyandot County Historical Society, Upper Sandusky, Ohio

“…. brings the past back into real events before your very eyes (a virtual real-reality), it engages the reader to want to converse with the author over his opinions and judgements. For example, several key players in addition to Colonel Crawford, such as George Washington, are described by the author as something less than saints on earth. So how do we judge these individuals? Should we? Well, Mr. Thompson gives us plenty of footnotes, many of which have an interesting story in their own right, and he helps by giving us, in my opinion, reminders too that many people back in the day (as in over two hundred years ago) had completely different perspectives because their necks (and scalps) were literally at risk on the frontier. There is a lot of material covered in this book, but the story will keep the reader moving from chapter to chapter, and, as in my case, when I return to those monuments and places of massacres and battles, I will feel like I had been a participant in this sad story of one man, two races, and several countries all at odds with each other.” A Reader